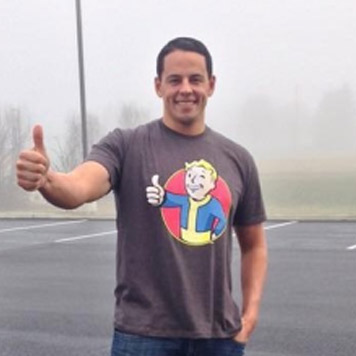 Careers don’t always follow a straight path. In fact, more often than not there are detours, timeouts and reboots. That reality is the inspiration behind our Career Journeys series, spotlighting people who have taken unique and inspiring journeys in the course of their careers.

In our second profile, we’re featuring Lance Baird. His relentless enthusiasm and optimism have enabled him to chart his own circuitous but successful career path through sales and advertising to principal in his own business.

Here’s what Lance had to say about his Career Journey.

What would you consider to be the single most significant transition or comeback that you’ve made during your career, and why?

I honestly think I’ve made two significant transitions. The first is when I completely switched industries from “weather” to “advertising” after receiving my executive MBA.

The second is when I decided to do my own thing as a business and marketing consultant. I now lead a mechanical construction company in all facets of the business and also help startups and small businesses grow quickly through digital marketing. The impetus for change #2? I had a baby girl and made a decision to stop traveling and be around my family as much as possible.

The first transition was definitely a “comeback” and I have the W2s to prove it. It’s still too early to tell on transition #2… but I like where it’s going so far.

Did you think about making this transition or comeback for a long time, or was it a more sudden decision?

I didn’t really expect either transition to happen; it’s not like I planned this. In the first scenario, someone approached me with an idea while at b-school, I looked into it, interviewed, negotiated and decided “why not.”

The second transition is more interesting, however, because in addition to having a baby girl, the company I was with also eliminated my position, and as a result, they gave me severance. Suddenly… I was getting a paycheck for a while and knew that I wanted to do my own thing… why not give it a try while effectively on someone else’s dime?

Describe the specific challenges you encountered in the course of your career transition or comeback? Did they make the process more rewarding or just more difficult?

LOL. Specific challenges for scenario #1 as demonstrated by the thoughts in my head that would often surface at the time:

“OMG. There is NO FREAKING WAY I can do this. I don’t really LIKE marketing anyway. I understand its function, but it just doesn’t thrill me. Why did I agree to this?

Specific challenge of transition #2 as demonstrated by the thoughts in my head:

“I must be OUT OF MY FREAKING MIND to move from a fairly consistent paycheck to all this crazy. And with a family? Is it really worth it? Can I really handle the construction industry and learning something all over again… again? Do I really want to get into the pseudo-marketing agency business again?”

I don’t know how you summarize those things… maybe the challenge is self-disbelief? Unquestionably, however, it makes the whole process that much more rewarding when you win. It’s just like football in way, in fact. (Lance was a football player at Princeton University and currently coaches high school football in Annapolis, Maryland.)

What kind of support did you receive in making your career transition or comeback?

I often rely on my father when making fairly significant life decisions because I know he’ll call bullshit on me and will tell me, brutally, when I’m about to do something insanely stupid. That kind of feedback is invaluable. I also have an incredibly awesome, supportive wife. (Hi, Jamie!)

Would you consider your career transition or comeback a success? Why or why not?

Not to get overly academic, but I think it’s important to define “success” before answering this question. To me, success is simply choice. If I’m very successful in my career, then I will have lots of choices. If I’m not, then I won’t. Maybe that’s oversimplified, but it’s worked for me.

With that in mind, the first career transition was definitely successful. My earnings went up as did my independence, which allowed me to enjoy great work-life balance.

The second transition, thus far, is also successful. My independence is virtually limitless now, which means I can fully set my schedule and don’t have to answer to anyone (except my wife – but that’s never going to change). I also get to build a business with some of my best friends, which is FREAKING AWESOME and SO much fun. While I haven’t earned the most I ever have, like I said, I like the trajectory… a lot. The classic risk-reward play, I guess.

What did you learn about yourself as a result of making this career change?

I’m a lot smarter than I originally gave myself credit for. It’s not as scary to “jump.” I can do this. The most important thing in life is family.

How has your career path changed from what you envisioned for yourself earlier in your career? Are you happy with the changes? Any regrets?

My old man was a peddler, as am I, and he enjoyed ridiculous amounts of financial success. Back in the day, I saw myself climbing the corporate ladder and achieving professional growth the “old-fashioned” way. So yes, it’s a pretty significant change. No regrets whatsoever. It’s been a great ride… and I know it will only get better.

Are you considering making another career transition in the future? What do you think it will be and do you have any specific timing or plans in place yet?

Jesus, I hope not.

What advice would you give to others considering a significant change in their own professional life?

If I were in a serious setting and/or taking myself seriously in the moment, I would probably reference this New York Times article, “The Moral Bucket List”, as pretty sound life advice. Think about what you’re doing in your career and why you’re doing it. Do those things align? If no, change immediately. If yes, then ask yourself this second question. Years from now… when you’ll be alone and/or only with your spouse, is it likely you’ll regret the opportunity cost involved with your career? Too much work/travel and not enough play/family when you had the chance, for example? If no, keep doing what you’re doing. If yes, you don’t have to change immediately… but perhaps you should start planning a transition.

If I were sitting with a good friend in a much more casual setting, however, I might say something more simple: “Just make the damn leap already. You can do it and there’s a whole world of fun on the other side.”