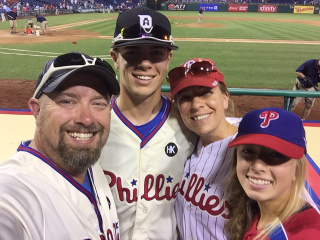 Careers don’t always follow a straight path. In fact, more often than not there are detours, timeouts and reboots. For the next few weeks, our Career Journeys series will be spotlighting people who have taken unique and inspiring journeys in the course of their careers.

In our first profile, we’re featuring a member of our own Beyond family. Cheryl Thompson is an Account Manager on our Client Success team who helps companies hire great people on Beyond. She also happens to have “Olympic athlete” on her resume.

Here’s what Cheryl had so say about her Career Journey.

What would you consider the single most significant transition or comeback that you’ve made during your career, and why?

The single most significant transition in my career would have to be graduating from college and starting what would prove to be one of the greatest adventures of my life. The chance to be a United States Olympian. Following this path would mean moving to a new city, Atlanta, and mastering a sport I had never played, Team Handball.

Was this transition or comeback made as the result of a personal decision, or were external factors involved?

The United States Handball Federation was searching for athletes to fill a few spots on their National team. The Federation sent letters to a mass of Division 1 athletic programs asking the coaches of these programs to let them know of any graduating athletes they worked with who they thought might be a good fit for the sport of Team Handball. Because I played three sports in college (field hockey, softball and basketball) and because the combination of these three sports seemed to make up the basics of team handball, my field hockey coach thought I’d be the perfect fit. Turns out, she was right.

Did you think about making this transition or comeback for a long time, or was it a more sudden decision?

Once my coach told me about the opportunity, I researched the sport and after praying about it, and with a little encouragement from my teammates, friends and family, I decided to give it a try. It was a pretty quick decision. In the middle of my senior year and in between games, I flew to Atlanta for a weekend tryout with the National team. I broke my finger on my throwing hand within the first 10 minutes of the first day of tryouts. I didn’t tell a soul until just before I was leaving to go back to school. I told the trainer and discovered it was broken in 3 places and the trainer of course told the coach. I’m thinking this may have helped my cause a little, because at least they knew I could play through pain!

Describe the specific challenges you encountered in the course of your career transition or comeback? Did they make the process more rewarding or just more difficult?

There were many challenges. After that weekend tryout I went back to school hoping to get a call back from the Handball coaches and sure enough I did. To make a long story short, they asked me to come back to Atlanta, where they were based, for a two-week-long tryout after I graduated in May. So, after graduation, I travelled with my Dad to Atlanta. He got me settled then he headed back home to PA. I was on my own.

After the two weeks was over, they offered me a spot on the National team to train with them full time. Let me explain what that entails as there is not much national funding for the sport of handball. Each athlete was responsible for sustaining themselves. I needed to figure out a place to live, and how I was going to maintain a full time job while also training 6 hours a day. It was challenging to say the least, but what I found to be the most challenging was despite being on the National team, the federation was constantly looking to improve the team by bringing recruits in for tryouts. Each time they would accept another recruit there was the possibility someone else would be sent home. It was a constant state of unknowing and very stressful! It kept us all on our toes and working at maximum capacity at all times.

All of that training payed off in May of 1996 when I was told I would be one of 16 members of the National Handball Team who would represent the US in the Atlanta Olympic Games.

What kind of support did you receive in making your career transition or comeback?

Oh my wow! I received tremendous support from my family and friends who raised money for me and helped me every step of the way. It was difficult being so far away, but somehow we made it work. My job with The Home Depot was a huge help as well. The Home Depot, along with a few other local companies, was part of The Olympic Job Opportunity Program. Employers in this program would hire Olympic athletes and pay them for 40 hours of work per week as long as the athlete could maintain at least 20 weekly hours of actual work. Since Handball isn’t really well known in the US, we were constantly traveling overseas to compete and train so any hours we worked over 20 would be placed into a bank of hours, which we could pull from once we returned from overseas. Therefore, we all worked 40 hour weeks to bank as many hours as possible so we would have a paycheck when we returned home. Without this support, none of this would have been possible. I’m forever grateful to everyone who helped me along my journey.

Would you consider your career transition or comeback a success? Why or why not?

Yes, I would consider my transition a success. Not only because I achieved my goal of making the Olympic Team, but mostly because I learned so much about myself in the process. It was an incredible journey and I came out on the other side a better person. From the time my Dad dropped me off, it was sink or swim.  Thankfully, by the grace of God and a thousand helping hands I learned to swim.

What did you learn about yourself as a result of making this career change?

I learned so, so much! Perhaps the greatest take away I have would be… I confirmed that a strong faith in God, hard work (really hard work!) and support from quality friends and family can get you through just about anything in life.

How has your career path changed from what you envisioned for yourself earlier in your career? Are you happy with the changes? Any regrets?

Well, the plan after college was to further my education to hopefully become a physical therapist. But God had other plans for me. To move to Atlanta, train for two years and make the Olympic Handball Team, while training, I would work at The Home Depot, where I would meet a man named John. After the Olympics in ’96 I would marry that man in ’97 and we would have two amazing children together who are the greatest gifts in my life. We are blessed to live in PA and I’m very happy to be working at Beyond.com, where I’m loving the work as well as all my co-workers. Surrounding myself with genuinely caring and kind people has been the key to my happiness at work and life too. So, to answer the question yes, I’m super happy with the changes and feel truly blessed and forever thankful for the path I have followed.

Are you considering making another career transition in the future? What do you think it will be and do you have any specific timing or plans in place yet?

No, I’m not considering making any career transitions in the future, but of course will always keep the door open. A shut door just doesn’t seem wise to me.

What advice would you give to others considering a significant change in their own professional life?

My advice would be to find what makes you happy and go for it. Accept help from others and be kind to people. Whatever you give of yourself, you will receive, so be generous with you time and talents.