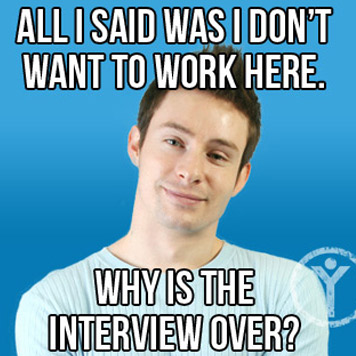 So what can we learn from this?

Don’t speak negatively about the company you’re about to meet with or the company you just came from. In most cases, the receptionist and the interviewer don’t know you and will be making assumptions about your personality and seemingly negative attitude.

Be on your best behavior.
As soon as you enter the office of the company you’re interviewing with, the interview has begun, so act professionally. The way you interact with the employees, other candidates, even the delivery guy, matters.

Be the bigger person.
If the interviewer says something negative about the job or the organization, don’t agree with them. Just because you might concur—it doesn’t mean they’re going to hire you. Find a way to spin their negative comment into an opportunity.

Ever made a mistake during the interview process and want to know how to resolve it? Share it with us in the comments below.