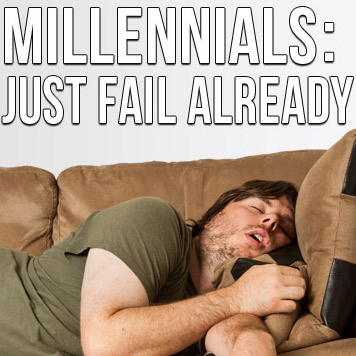 We all know the rap on Millennials. Nice kids, but they’ve been coddled by their Boomer parents and aren’t able to deal with some of the harsh realities of life. In fact, they chose to go back and live with Mommy and Daddy as adults rather than brave their way in the big world.

A new survey by Nexxt suggests that Millennials are finally ready to claim their place in the world. 74% of Millennials said that they want to be an executive leader–more than any other generation, including Gen Z’ers just starting to enter the workforce. But, the number one reason why Millennials were worried about leading was fear of failure.

Tweet This: Millennials are finally ready to claim their place in the world.

My advice? Get over it. Leaders don’t spend their time worrying about failure. They lead. They make decisions with imperfect data knowing that the only incorrect decision is to not make a decision.

The reality, of course, is that 74% of any generation can’t be executives. But, if you want to lead now is the time to make your move. Volunteer to take on big projects. Work longer and harder than your peers. And, be ready to fail. Then learn from your failures and work even harder to overcome them.

Some people are never able to get over the fear of failure. Some people don’t want to work harder than everyone else. That’s okay. Only 63% of Generation X want to be an executive leader, and only 54% of Boomers. As people grow older, priorities change, and leading at work may become less important than leading a family or pursuing a personal passion.

Many of the differences that we label each generation with are actually differences in age and stage of life. When Boomers were labeled hippies, and speaking truth to power, who would have predicted that one day we would be worrying about losing their leadership and guidance when they retired? When the time came to step up, Boomers did.

The time for Millennials to step up is now. So, Millennials–just fail already. And, Boomer and Gen X leaders–give Millennials a chance to fail. In the worlds of C.S. Lewis, “Failures are fingerposts on the road to achievement.”

[For the record, I’m Gen X, sitting grumpily between the Boomers and their children.]