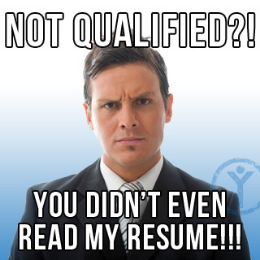 Is anyone out there? One of the biggest frustrations for job seekers is sending out applications and never hearing back. It’s as if the human element is missing from today’s job search process. In the article below, Mark Anderson, Nexxt’s former Vice President of Employer Sales, sheds some light on what’s happening on the hiring side of things and explains how you can break through and make a real connection.

As he sat at the dinner table listening to his wife and kids talk about their days, John didn’t really hear a word they were saying. He couldn’t keep his mind from wandering back to the big decision he had made earlier that afternoon. After years of apathy about his job — and years of dreaming about providing a better life for his family — he had finally done it. Despite his fears, reservations and resistance to change, the day had finally come — and he couldn’t wait another minute to share it with his family!

“Honey, kids, I have a little announcement to make… you know how you have all been telling me for years that I am really good at what I do and that I should expect more from myself? Well, I finally listened and I am happy to announce (drum roll please)… that I completed an online application for a new job today!!”

Although he was a little nervous that he hadn’t received a response yet to the job he applied for, it had only been a few hours and he felt confident it was just a matter of time. After all, he’d spent over 40 minutes completing every stinking question. Yep, he’ll get it. Why wouldn’t he? Hitting the refresh button one last time, he put the phone away so he could savor the moment.

Unfortunately for John, he would never hear anything back from his application. Despite his disappointment, he continued to pursue a new chapter in his career, applying to more promising jobs, all with the same outcome. Actually, he did receive one response letting him know that his resume had been received, but there were other candidates who were more qualified…

“More qualified candidates? How could they possibly know that, when they’ve never even met me? I even bought a new interview suit… Boy what I would do to get THAT $200 back. And of course now that I’m actively pursuing a new job, my ‘old’ one seems even less satisfying.”

John, like millions of hard working people throughout the country, knows his craft extremely well. And if you asked his boss, he would tell you that John is invaluable. Yet like many job seekers today, John is missing one skill that would help him get hired faster and easier — the ability to effectively market himself.

He’d never had to create a resume in the past, so he skipped over that step in the application since it was “optional.” He didn’t have all of the dates handy, so he took his best guess. Typing was never his thing (nor was it important to his job), so he didn’t notice that he had a few misspellings and formatting issues.

While John lamented his failure to find a new job and lost interest in his current job following his mental “check out” inspired by the decision to move on, a very different conversation was taking place over at ABC Company, the company where John initially applied…

The recruiter at ABC Company was preparing for her meeting with the hiring manager responsible for filling the position that John applied to, so she pulled her reports and looked over them one more time. She was VERY proud of her efforts and confident that he would be pleased. After all, since posting the job two weeks earlier on a variety of career advertising resources, she had registered over 1,500 views of the job, over 400 external clicks and over 250 completed applications. Of these, she was able to use high-level sorting criteria to instantly get that number down to 50 of the most “qualified” applicants. These were further screened by her “trained eye” to get the list down to just five candidates, exactly what the hiring manager had asked for!

“I sure hope this goes well. After all, if I want to keep my job I’d better make sure I’m delivering solid numbers and keeping things super-efficient.”

The reality is, in many cases the process of finding and hiring talent has become an impersonal numbers game. And while corporate recruiting departments analyze their dashboards to see how many thousands of “clicks” they got the day before, there are living, breathing candidates — many of whom would make excellent hires — getting lost in the shuffle.

These days, being a highly qualified candidate isn’t always enough – you have to be a highly skilled job seeker, too! So, how do you play this numbers game and win? Here are some tips…

Customize your resume for every position. That’s right, you should edit your resume every time you apply to a job. Review the job description and identify keywords used to explain the qualifications and skills required — then use those same keywords in your resume. That doesn’t mean you should add anything that isn’t accurate or relevant to your experience; it just means you need to speak the right language. This will help you get past those computer filters and, hopefully, in front of a real person.

Look for an inside edge. Reach out to your friends and other networks to see if you know someone at the company where you want to work, so they can put in a good word for you. You never know – your neighbor’s sister-in-law may just work for your dream company and be able to put your resume right into the hands of the hiring manager.

Put your best foot forward. Create an online portfolio that provides a visual overview of your career in a quicker, compelling way than a traditional resume. Include your email address and a link to your resume, so you have all of your bases covered. You’ll stand out from everyone who submits just a standard resume, or worse yet, only fills in the bare minimum application information.

With these three simple steps, you can begin to close the gap between the way job seekers search and the way companies hire. And the smaller that gap becomes, the closer you’ll be to your own end goal — a great new job.