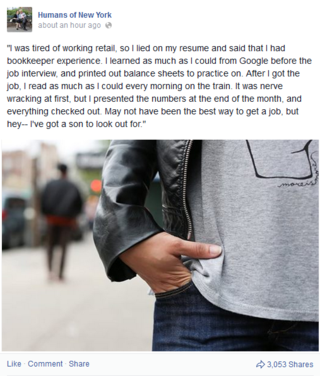 I’ve written before about Humans of New York. It’s a blog that’s all about capturing the human condition – and since jobs and careers are a central part of most people’s lives, they come up pretty frequently. Today a career-related post from HONY appeared in my Facebook feed and caught my attention for a couple of reasons.

First of all, it’s a pretty inspiring story. This person found a way to drastically change her career path, and changed her life for the better in the process. It must feel so empowering. But, wow, it must be so stressful too, because she ultimately has to cover up her lie for as long as she has that job. If the truth comes out, she could very well lose that job and be left without a reference to get another like it.

It doesn’t seem worth the risk.

Especially when she did so many other things right. She did her research before the interview. She educated herself on the skills she would need to do the job well. She continued to practice and hone her skills on the job. I have to think that with her diligence, initiative and intelligence, she could have landed a bookkeeping job without lying. It might have taken a little longer, but it would be a much more stable foundation on which to build her new career.

When she mentions having a son to take care of, though, that’s a hard point to argue with. Like most parents, there isn’t much I can’t imagine doing for my child.

So, what do you think about the path she took to a better job? Is it inexcusable, commendable, or somewhere in between?