If you watched the Oscars on Sunday night you may have noticed that Tony Award Winner, Idina Menzel sang the Oscar winning song “Let it Go” from the movie “Frozen” and it was awesome. But when Idina Menzel was introduced, John Travolta totally botched her name calling her, “Adele Dazeem.”

Despite the name glitch, Idina was a true pro and sang her heart out, but what if you’re not performing in front of millions of people? What if you’re on a job interview and the interviewer botches your name? Do you correct them or let it slide? 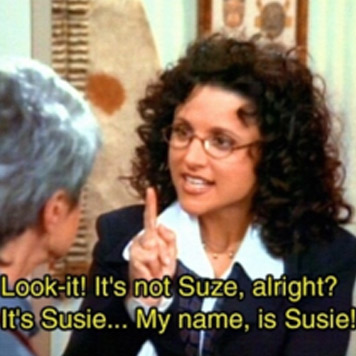 But in reality the best way to have the interviewer get your name right is when you meet them and shake their hand introduce yourself, by clearly saying your (preferred) first and last name.

That’s easy enough, right? Don’t let yourself end up like Elaine on Seinfeld. When a colleague thought her name was “Susie”—Elaine felt compelled to correct her when she called her “Suze” but hilariously never corrected her to say that her name is actually “Elaine”.