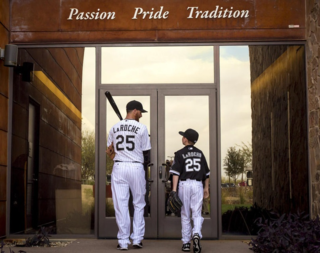 Last week, veteran first-baseman-turned-designated hitter Adam LaRoche retired from the Chicago White Sox, citing a disagreement over his son’s time in the clubhouse. In walking away from the team, he also walks away from the $13 million he was to be paid for the 2016 season.

Of course the initial reaction is, he’s crazy to leave that much money on the table. It’s the kind of money most of us can only dream about earning in a lifetime, much less in a single season. But it’s precisely because he’s been making that kind of money for most of his career that leaving behind the $13 million an option for LaRoche.

In fact, LaRoche’s focus on #familyfirst is right on trend (and trending) with other high-profile fathers who have been shining a spotlight on the need to balance family and career, no matter how high-powered that career may be. Facebook CEO Mark Zuckerberg took two months of paternity leave after the birth of his daughter in late 2015. Toms Shoes founder and CEO, Blake Mycoskie took twelve weeks. Both companies offer paid parental leave for male and female employees, and both men cited a desire to send a message to their employees that it’s okay to take advantage of it.

So far, this isn’t trickling down to the rest of the workforce. According to the Department of Labor, only 12% of private sector workers have access to paid family leave through their employer. Most working parents simply can’t afford to take unpaid leave, and when they do it’s much more likely to be the mother. But the attitude shift taking place is encouraging.

As a mother of two kids under three, I’m all for anyone who draws attention to the ongoing issue of work-life balance and the importance of supporting families, whether that be through paid family leave, flexible schedules or just making it okay for dads to choose extra time with their kids over extra money in the bank.

In LaRoche’s case, he was just starting his Major League career when his kids were young. And whatever his teammates thought of having a teenager in the clubhouse, a toddler would have been a much tougher sell. So, LaRoche wanted to take full advantage of his unique situation later in his career. And when it didn’t work out, he decided time with his son is worth more than $13 million. Agree or not, it’s his decision to make. I don’t think he’s a victim, nor does it seem like he’s portraying himself as one. He’s just a dad who decided he’s done enough providing and wants to focus on parenting.

I’m sure plenty of people are thinking hey, it’s just a year – why not suck it up, get paid and then go hang out with your kid 24/7 if you want? But in the life of a kid a year is a long, long time. When they’re really young they develop and change so quickly that even missing a couple of weeks is a lot. And when they’re older, you start to realize how little time you have left before they’re out of the house for good. At 14 years old, Drake LaRoche is approaching that age, and I’m sure that was on his father’s mind when he made this major career decision.

Even if you can’t fathom passing up $13 million to spend more time with your kids, everyone has their price. And, everyone certainly makes sacrifices when they combine kids and career.

I choose to use my lunch break almost every day to head over to daycare and feed my 4-month-old, and I’m somewhat protective of that time. I give up time to run errands or walk outside, and yes, sometimes the opportunity to get a little extra work done. But if I can’t be with him all day every day, I’ll do whatever I can to hang on to that hour. My husband sometimes travels for work, and since our kids were born he’s more selective about the trips he goes on and tries to limit them to one or two nights away. I’m not saying we would quit our jobs if my company asked me to work through lunch or his insisted that he travel every other week. But if I had millions in the bank already, I could definitely see myself passing up a few million more to be a more present, hands-on parent.

The bottom line is this: even though most of us can’t relate to LaRoche’s paycheck or the life choices it affords, plenty of us can relate to his willingness to sacrifice for his family.

Have you had to – or chosen to – sacrifice career opportunities for the good of your kids and family? Could you see yourself making the same decision as Adam LaRoche? Tell us in the comments, we’d love to hear your take!

How a quick tweak on your resume and social media profiles can open the door for more opportunities. https://theconfidentcareer.com/2022/07/use-consistent-keywords-to-strengthen-your-brand-in-your-resume-and-social-profiles.html